The majority of people who own computers are rarely disturbed by their CPUs’ performance or even factors that affect the performance.

When it operates at optimal conditions, a computer runs smoothly. It completes the tasks assigned as efficiently as designed. The most critical factor to a CPU is temperature levels, with higher ones slowing down operations. It can even lead to its general shut down as a mechanism of preventing it from getting ruined.

If your laptop has issues and seems to get into the ranges, your components may be at risk. Check out this cooling pad! We love how it helped performance during long gaming sessions! 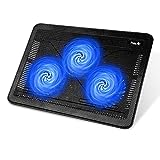 32,075 Reviews
Amazing cooling pad
Here's what you need if your laptop is having issues staying as cold as it ideally should be when you're gaming. This could really save your device.
Check the price on Amazon.

Getting to know your computer’s temperature is very easy. Modern motherboards have preinstalled thermal sensors that give accurate real-time readings. To get the readings, you may need to install software applications tailor-made to give accurate readings in Windows. Older versions of Windows don’t have built-in apps that can read and report when the computer is in use.

What should the component’s temp be & what is good?

There is no single CPU temperature that is said to be optimal. There are ones that you can work with depending on the model of your computer processor and the tasks your computer is running.

Good temperatures for idling PCs vary with the room’s conditions. At times it gets up to 10º Celsius above the surrounding conditions. Those are good conditions for an idling computer. For PCs that are not heavily engaged, conditions higher than 60º C indicate that the system may be overheating. You want to take measures to prevent it from getting damaged.

If you suspect your laptop’s running hot, we recommend you get this fan cooler. It’s placed on the side of your laptop and will constantly monitor the temperature as well.

217 Reviews
IETS Laptop Fan Cooler
This unit will tell you if you have an issue with your laptop.
Check the price on Amazon.

Modern computers have been designed to handle several tasks at once and manage higher ranges without malfunctioning. They’ll also take measures to avoid shutting down. Slimmer laptop models such as the MacBook will handle relatively higher temperatures. At the same time, they’ll perform as expected.

Some processors can comfortably manage their tasks in conditions as high as 90º C without shutting down operations.

Make sure to check out our guides on sheet metal and wood chippers, too.

How hot should it get?

The temperature can be used as a test of how well or poorly it functions under intense video rendering and gaming playing. It is normal for them to get hot while used, especially under intense operations.

While under intense conditions, it can get as hot as 90º C. Some newer models can sustain internal conditions of about 110º C. You should reduce the functions of your system once it gets to 90º C to protect it from getting destroyed.

It starts to malfunction at extremely high temperatures and might ultimately shut for self-preservation. Such conditions significantly reduce the component’s lifespan.

It is quite abnormal to have a CPU running at 100% capacity. It ultimately leads to the processor becoming unnaturally slow and unable to run its processes comfortably. A computer running at 100% could be running many tasks at once. It can also be a task that requires a lot of attention from the CPU cores, thus taking nearly all of them.

Some of the common causes it is running at 100% include the following;

Background processes run on the processor but are not opened by any window. As you use your Windows or OS, there will always be programs that run in the background. They support your PC’s running for the programs to operate smoothly.

With time while using your PC, you add more software. The number of background processes increases. After some time, you may end up having more than your PC can support. At such a time, the usage increases significantly. It may start to malfunction or run basic tasks slower than usual.

If it is already there, you can stop it from running and assign it only one core.

This is a service that a PC cannot run without because it helps run applications. Without it, the applications cannot run. At times, WMI may have prolonged high CPU usage due to another software requesting a lot of data.

Some viruses lead to high CPU usage slowing down your activities while on the PC. You can at times also find an antivirus that is causing high usage. In such a situation, you are advised to clear the virus. If the antivirus causes it, you can restart it to see if it can reduce its strain.

What are the normal CPU temperature ranges while gaming?


Normal temperatures while gaming has evolved. They have been getting higher. With the introduction of GPUs (Graphics Processing Unit), normal gaming temperatures have increased. It has left processor designers to increase the strain on computers can function. Gaming requires performance at extremely high workloads.

The normal condition while gaming is around 80 degrees Celsius. For those higher than this, you need to start looking into ways to reduce the stress on the CPU. You will want to avoid any damage caused by extreme conditions.

You can achieve the normal range while gaming by reducing some processor activities or improving its design to better cooling.

How to check the computer’s CPU temperature?


There are two main ways of checking the temperature. Check it through downloaded monitoring programs or BIOS settings. You may check it with the help of the thermal sensors that come preinstalled with the motherboard.


As previously indicated, rarely can you find a CPU temperature that is dangerous for a CPU unless it is too high. For instance, modern Intel and AMD (Ryzen) processors can handle temperatures as high as 100 degrees Celsius. These were previously viewed as too high.

A PC idling at 60, 70, 80, or 100 degrees Celsius is too hot for its CPU. A suitable remedy needs to be found to get the component working back at normal levels. Acceptable levels in terms of an idling one is a maximum of about 10 degrees Celsius above the ambient temperature. This will indicate that your system is likely capable of getting rid of excess heat, thereby ensuring its longevity.

For CPUs in use for normal activities that do not strain it, temperatures as high as 60 degrees Celsius and 70 are allowed. It depends on the tasks it is performing.

For activities that engage it at extremely high levels, the range in which it starts becoming dangerous will vary depending on the model. Gaming will cause higher temperatures. Newer models will still operate optimally at temperatures as high as 90 degrees or even 100. When you start going higher than 100 degrees Celsius, you start entering an area too high.

Want a guide on either generators or 20,000 BTU air conditioners? Those are things we’ve covered as well!

Checking CPU temperature is a new feature that was included in Windows 10. You can easily use the Task Manager to check it, where you can even check it for the GPU.

To check, open the Task Manager. Click the ‘Performance’ tab and look for the CPU and GPU as listed in their respective sections.

BIOS mode of temperature checking is not suitable for stress testing as you have to go to the task manager to check it when off the apps.

You can also use third-party programs to see it while under normal use. If you are only interested in checking the conditions of your CPU, you can disable the stress-checking bit.

How to lower your CPU’s temperature

Just underneath, you’ll find the absolute best thermal paste available. If you care about your computer’s performance or durability, this is the product you want. 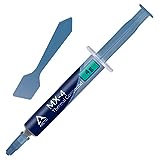 Thermal Paste
The MX-4 thermal paste is what you will want.
Check the price on Amazon.

The allowable temperature ranges can be easily subdivided into three categories according to their use:

While idling, the expected temperature is about a maximum of 45 degrees Celsius or 10 degrees above how hot your room is.

Under normal use, the normal maximum operating temperature is about 60 degrees Celsius or lower. It depends on the condition of your unit.

Models such as the Intel i7 can handle temperatures as high as 95 degrees at full capacity. It is advisable to remain below 85 to reduce the chances of the component getting spoiled fast. If it exceeds 85, look for cooling remedies. You want to ensure your system gets the adequate cooling and protective measures it deserves!