When it comes to the wonders of living, there’s nothing like chilling and relaxing in a house. That’s true for many, including me. I wake up in the morning to have breakfast. I chill like there’s no tomorrow. But sometimes, it isn’t always as smooth as I want it to be. Do you want to know why? Because from time to time, I find flies annoying me with their buzzing noises. They love to torment me when I want peace because they are all over me. So, it just has me asking over and over…

Why are there so many in my house all of a sudden?

It’s the question I’m nagged with inside my head. Why? I don’t know. It frustrates me sometimes that they’re everywhere. I try to chill while using my computer, but they come to bite me. I do my chores, but they keep flying everywhere. I end up slapping myself to get one good hit at them.

So, it can be a challenge to live with these flies going about. I tried to live with it as if they were nothing, but they kept on coming back like they were ready to pounce at me. After several days of trying to leave it, I had enough. That is why I am writing this article to take what I did to get rid of them.

Surprise, surprise, that’s not me. I have looked like that myself as I have previously chased them around the house. Eyes reeking of desperation.

Before we continue with my experience getting rid of these no-good insects, it’s good to know the common types that fly around houses. I’ve seen some of them, but you may see others on your end. Here they are:

These bad boys are the most common type because they’re everywhere. Found mostly in homes such as mine and others, they can be found in areas you’d least expect. They can show up in places such as walls and plants.

As the name shows, they’re the kind that feast on the fruit. You’ll be surprised to know they can also be found near vegetables and liquor. They can also show up in other things that make them more than just what they’ve been named after.

This type is as common as you’d think because if house flies are considered easy, these guys are the hard levels. Flesh flies tend to be found near smelly things. You know the deal: Human excrement, disgusting decaying food matter. Other things make you think of the word “garbage.”

There are other types besides the ones discussed here, but you generally watch out for these guys. They can annoy you everywhere.

Where do they lay eggs in the house?

Now that you’re familiar with the types let’s get back to where I left off. Before I got into the business of fighting against them, I had to educate myself a little more on why they were even in my house.

So I asked: where do they lay their eggs in a house? They didn’t just come here and swarm around like it’s a festival and leave again. There is a reason: they laid eggs in my house. By doing so, they’ve made my house their hive. After doing some research, I confirmed that they lay their eggs in a house in moist areas such as garbage and decaying material. If you happen to have an area in your house that contains human excrement, you’re bound for a hive in there. The other types lay eggs in other places. In general, they prefer stinky and disgusting things.

So to prevent them from ever laying eggs in the house, it’s best to make sure there are no areas that have anything moist. Keep all areas spotless. It’s also a good habit to keep the garbage disposal area clean. Flies won’t have the temptation to lay their children there.

In short: keep a house spotless, and there’s no way the flies can ever lay eggs at all.

How do I get rid of an infestation in my house?

Once I got a good idea, I asked myself the above question. The answer? Get a professional to inspect for you. While I know, I don’t have this kind in my house. It’s still a good option to consider because if you have done all that you can to sanitize the area, there’s a possibility of an infestation. It’s especially if more flies are incoming.

If you don’t get someone to inspect, it can bite you back in the long run. You may even be surprised that the infestation can be hidden in areas you never expected in your house. So take note: if the flies still come back after you’ve done what you can, hire a professional to help you root out the cause.

Just be ready with the money because you can’t expect to get the consultation for free. You may also be advised on things to get as a way of maintenance. Take note and get them when you can based on your budget.

So if there isn’t an infestation at all, how do you get rid of them quickly? How do you ensure they don’t go buzzing around to annoy you? Here are some of the tactics I picked up as I continued on my quest to get rid of them:

How do you get rid of a fly infestation quickly?

Other items can help you take down the flies, but the types you’ve just read about can be a start on finding the one that suits you.

Best products to get rid of them quickly.

After getting familiar with the situation, I checked out the best products to help get rid of these pesters so fast I didn’t break a sweat. There were many to look at, but I could narrow down 3 of them that proved effective. What are they? Read on below as I suffered from this issue, in particular around my cucumber and Sansevieria:

Honestly, this is the product that will make it bearable to sit outside and enjoy your BBQ again.

I love spending my time everywhere in my house, so it got annoying when the flies followed me around. So when I saw this product, I was curious. Can a portable electric zapper save me? Thankfully, it did. This product effectively got rid of the flies quickly. I could hear the sound of the buzz that told me that the flies were already going down one by one.

All I had to do was put the zapper like a lantern in my garden, and presto. The little pests were going down. When I noticed them swarming inside some areas, I put it where I needed it. Presto! They were going down there, too.

This item is non-toxic and environmentally friendly. It is cost-effective, so I had a lot going with the money I used to pay for it. My only complaint is that I have to clean it up often because the corpses of the pests that got zapped are left at the bottom. I tend to forget to clean things, so I’ve made it a slow habit to check on them every day.

Unlike many other things I’ve ordered in the past, the zapper seemed to look a lot like its Amazon picture.

The next product is GREAT for your garden! 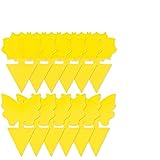 24,383 Reviews
Traps
I like how discreet this is, and how I can just put it in the soil of my plants.
Check the price on Amazon.

The zapper was a great thing. It wasn’t quite effective against the flies who were going about near my garden, particularly the flowers. They were always buzzing around them, and I got worried they’d do something catastrophic to my lovely décor. That’s why I was able to get rid of them fast.

This sticky trap looked like you could stick it on some desk and write notes, but I underestimated how effective it is. I put a few of them near the flowers where the flies were flying, and they got stuck to them in no time. I was mesmerized by it.

Besides having the best features of a sticky trap, these items looked deceiving because when I put them by the plants. They looked like décor. When I checked to see how things went, I saw more bugs after some time. It’s like a butterfly trap.

I also gave it a try with an indoor plant. Surprisingly, bugs were getting stuck on it too. Yep, they are relentless in their attempt to ruin my life. They’ll never get the better of me! The amount of gnats that these will catch is also great, although I am yet to figure out how to get rid of the gnats fully. I suspect I may have to replant all my plants.

The downside I’ve found with this is that restocking is a must if the traps are used a lot. I’ve made it a habit to make sure I got enough. 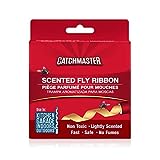 7,632 Reviews
Catchmaster
I tested product, although I generally avoid putting it in places where it would visually bother me. An example is the kitchen.
Check the price on Amazon.

After taking care of the ones indoors and outdoors, I noted that the next area I needed to take care of was the garbage area. It was hard to use the zapper and common sticky traps there since I didn’t like those items reeking of stench. Instead, I set up the sticky ribbon trap near the garbage can. In no time, the flies were getting stuck!

This is a groundbreaking product because I’ve only thought sticky traps could only stay flat. I sure was proven wrong when I got this one. A few days went by, and the sticky ribbon trap was able to take care of the flies. There are fewer now in the garbage area, but it’s all good. I’ve also put a few in some indoor areas as a precaution if the zapper needs some rest.

The downside to this is that I have to resupply more and more, just like the sticky trap.

How do you find the source of fly infestation?

Check areas with moisture or with rotting food or garbage. This might be near the trash or around sinks and washbasins in washrooms and kitchens. Once you find the source, it’s easier to destroy the home. The flies are removed once and for all.

How do I get rid of flies in my house naturally?

You can use herbs and certain flowers to get rid of flies. Marigold, bay leaf, lavender, and basil are very effective. You can also use cayenne pepper mixed with water and spray it around the house.

What is the best way to keep flies out?

You can use strong scents that repel flies like lavender and citronella. This can be in the form of air fresheners or even scented candles. Keep garbage areas clean and prevent moisture in nooks and corners.

What smell will keep flies away?

Citrus, lavender, eucalyptus, and bay leaf are some of the smells that repel flies. Rosemary and marigold are also very effective.

In the end, I overcame my issue with the methods mentioned above. By having an idea of why they came about along with the common types, I fixed my issue. I found out where they lay their eggs and how to get rid of them. I conquered them and made sure my house was safe sound. The items I tested proved very effective, and I’ve made sure to use them in ways that won’t disrupt my harmony. If you happen to have flies going around your house, read up on my experience and get the items I tested. Don’t let these pests get you; you’ll get to them instead and claim your peace.